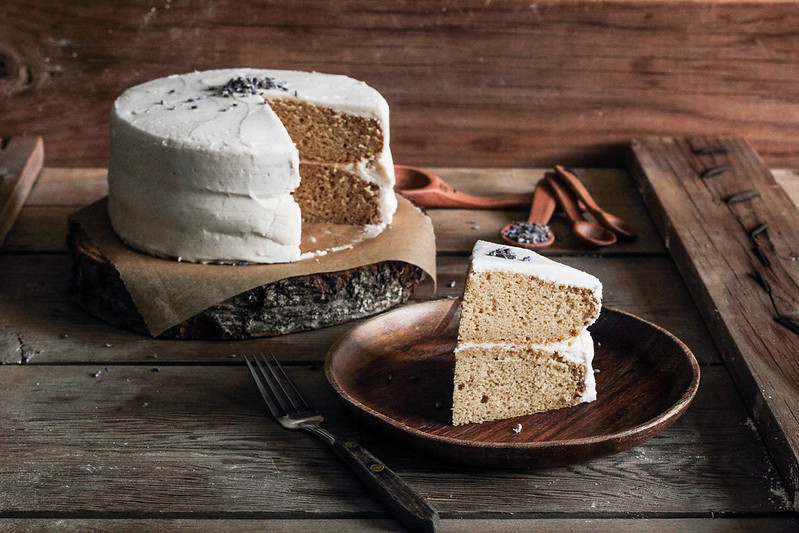 It was one of those summer afternoons where the sun beats down and the air swells with heat. A few years ago I was settling into a new apartment, unpacking the expectations and hopes of a recent college graduate. It was the earnest love of a new experience that lead me to the city of Montreal and the promise of the unfamiliar that rooted me. My heart and mind were open and waiting.

The summer heat quickly crept through the cracks in the doors and windows, overwhelming the small space with oppressive warmth. When the sweat began to bead on my forehead, I escaped outdoors for the hint of a breeze. During summer, the streets of Montreal are filled with colorful stoops and the fierce spirit of potted plants in bloom. While I thought the center of such a large city would be all brick and concrete, I was surprised by the amount of life, growing and thriving, to be found. 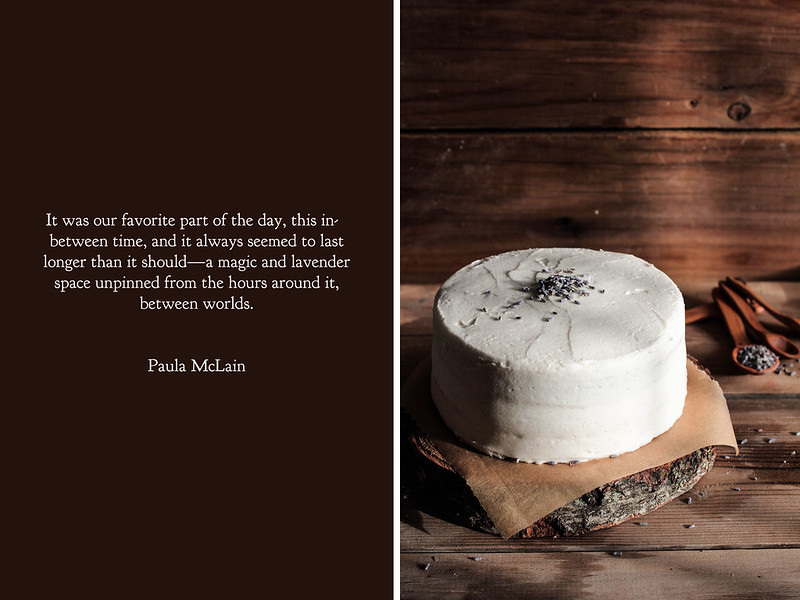 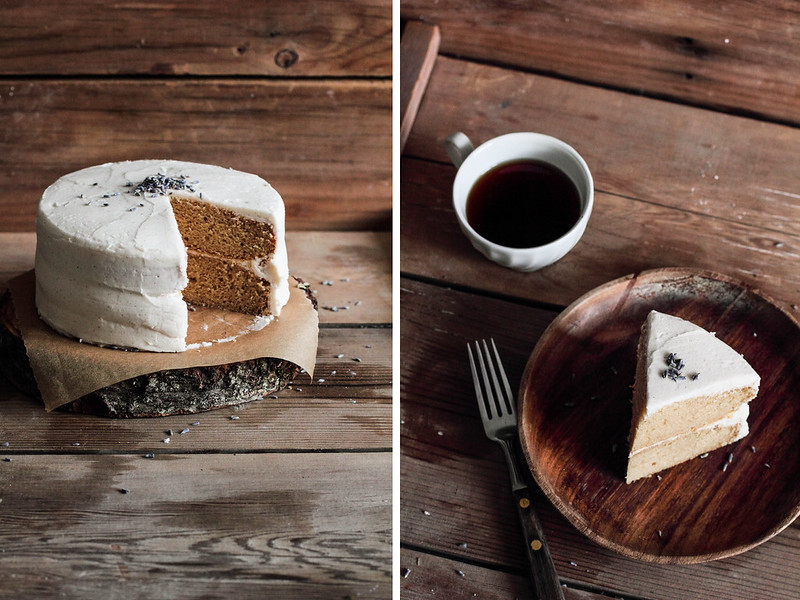 Back indoors, cheeks red from my walk, my roommate treated me to a glass of homemade lemonade to cool me down. A neighbor had gifted her a bundle of dried lavender and she used the buds to infuse the latest batch. Lavender lemonade. I was hesitant at first. The scent of lavender reminds me of soap and summer meadows, not sweet refreshments. However, I was in the market for new experiences and, though small, this would be one of the first. After I took a sip of the pale drink, my opinion changed. The subtle tones of lavender felt the perfect match for lemon's tart disposition. I finished the glass and wished for more.

Though I have hundreds of memories from those first few months on my own, this one has gripped me closely. Perhaps it was the heat or simply the beginning of a new adventure, but that cold glass of lemonade remains one of the fondest. 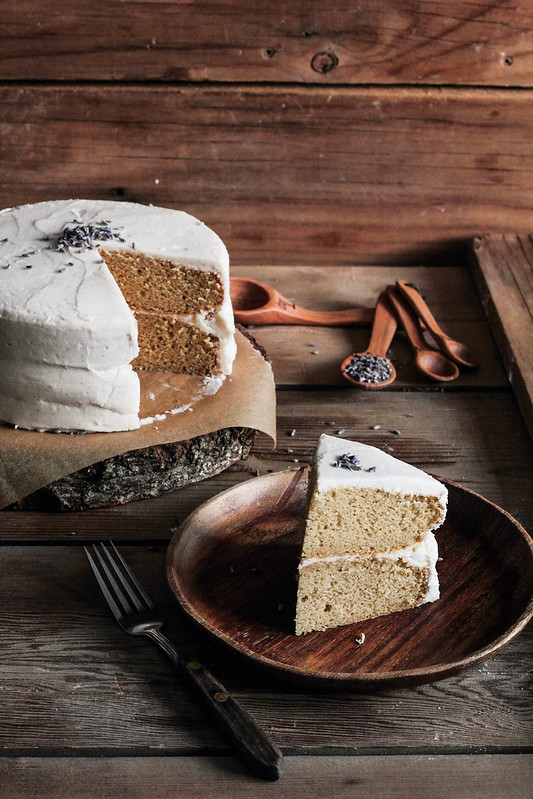 Since my first introduction to both flora and food, I have become smitten with the combination. I am often searching for new ways to combine herbs and floral scents with my favorite desserts. The key to baking with flowers or herbs is to keep it subtle—too much and it quickly becomes overpowering. Chocolate cupcakes infused with lavender buds and peaches cooked down with thyme are a couple of my recent favorites. And, as always, recreating that memorable lavender lemonade.

Until this point, I enjoyed buds and blossoms primarily for their bold colors, soft lines, and honeyed aromas, but it had not occurred to me just how delicate they could become in food. The subtle aromas, the muted tones, the calmness they brought to a flavor storm of complexity—it was beautiful.

It opened a new door to how I perceive and interact with food. 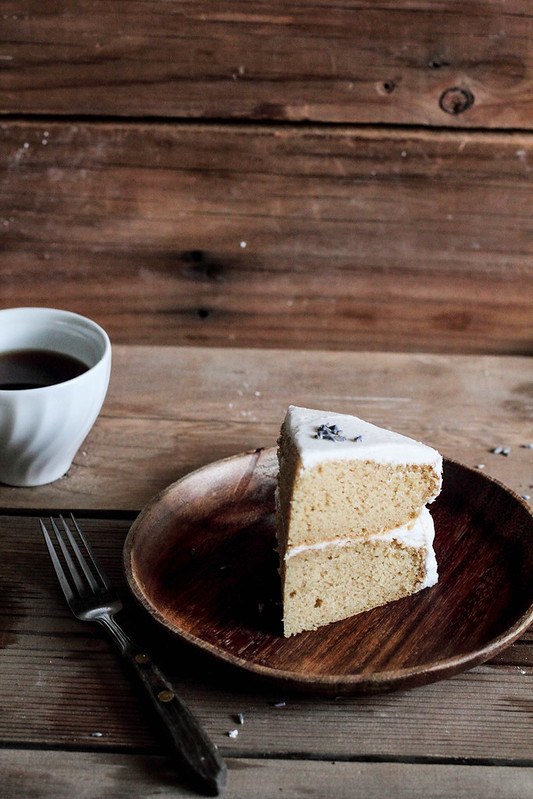 This Lavender Vanilla Bean Cake rests at the intersection between my love for sweet scents and sweet eats. The milk in the batter is infused with lavender, adding a delicate tone that is neither too perfumed nor overwhelming. Both floral individually, the flavor of lavender compliments the vanilla bean well, but together they create a combination that is gentle, yet surprising.

Using a mortar and pestle or spice grinder, crush the lavender to release the oils.

In a small saucepan, heat the milk until just boiling. Stir in the lavender, cover and remove from heat. Allow it to steep for at least 30 minutes. Strain out lavender.

In a large mixing bowl, cream together the butter and sugar until light and fluffy. Add the eggs one at a time, beating well after each addition. Beat in the vegetable oil and vanilla extract. Gradually add in the cake flour, baking powder, baking soda, and salt. Mix in the lavender infused milk, stirring until batter is uniform and smooth.

Divide batter between cake pans and bake for 35-40 minutes, or until a toothpick inserted into the center comes out clean. Allow to cool to room temperature before frosting.

In a large mixing bowl, beat the butter until creamy. Add the powdered sugar and beat to combine, scraping down the bowl if necessary. Mix in the vanilla bean paste, salt, and milk. If frosting is too soft, add more powdered sugar until it reaches a spreadable consistency. Likewise, if the frosting is too stiff, add a touch of milk or cream until it reaches a spreadable consistency.

To assemble, place the cooled bottom cake layer on a serving platter. Spread a layer of buttercream on top before placing the second layer. Spread a thin layer of frosting along the top and edges.